Last Updated: 23rd September 2022
In what seems to us to be a perfect example of the UK Government introducing new driving regulations “just for the sake of it” we have yet another rule change for driving on the continent.

From 28th Sept 2021 vehicles and anything being towed should now display a “UK” Sticker as the country identifier not the old-style GB sticker or previous GB/Euro flag type ones.

You can buy the new UK stickers and UK Number plate stickers via our sister website Euro Motoring.

If you need a UK sticker for a motorcycle see here. 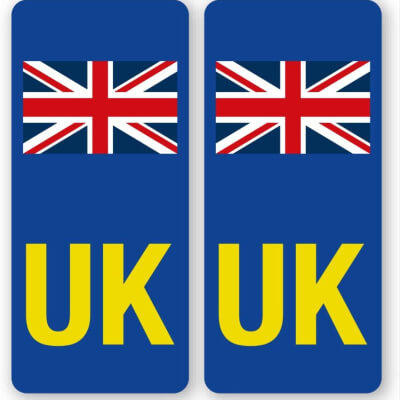 If you read this article, you will know all the requirements for having a UK sticker on your car, so you know why you need them and what size etc to fully comply with the rules.

See our full Driving in France Checklist page for other things you should be aware of. 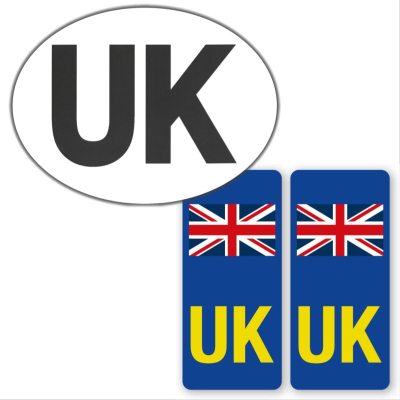 A brief history of the recent changes.

When Brexit came into force (January 2021) the old-style GB Stickers and the GB number plate ones with the Euro Stars flag were no longer valid and everyone driving in France and beyond had to have the plain white GB Sticker on their vehicles and trailers.

Your number plates could no longer have the GB letters with the EU Flag around it and had to be replaced with the Union Jack and the GB letters. Just a few months later the rules changed yet again.

If you are annoyed that it isn’t that long since you went to the expense and trouble of ordering new number plates and or GB stickers, spare a thought for people like us who literally threw thousands of them into landfill on the 28th Sept 2021!

So from 2022 onwards any UK motorist (In a UK registered vehicle) is required by law to display the new country of origin identifier. This is now a UK sticker.

The official size is 18cm wide by 13.3cm tall. Some suppliers sell smaller ones because they look less intrusive on the car but they are not legal. I guess the police would need to be pretty petty to get a tape measure out, but never put it past them.

If you want to just have a number plate sticker, which is a lot smaller and less intrusive, you could opt for a set of those. Though they are legal in France to have on their own they are not in Spain, Malta or Cyprus. They insist on a full sized one even if you have a UK number plate sticker.

These rules apply whichever country outside the UK you are driving so that means not just France or mainland Europe.

Where do I put my UK car sticker?

Well, it must be clearly displayed somewhere that a following police vehicle can see it. Don't have anything overhanging for example that can obstruct it.

If you are towing something, like a caravan or boat, that MUST also have a UK sticker.

Where possible I put mine on the rear window as they are easily removeable without damaging the paintwork or use one of the magnetic UK plates.

The New Rules in detail

From 28 September 2021 onwards you need to display a UK sticker clearly on the rear of your vehicle (without exception) in Spain, Cyprus or Malta.

For other European countries like France, Germany etc, merely having the new UK and Union Jack on your number plate is sufficient.

If you don’t have the new UK number plate stickers, then you must have a full-size UK sticker on the rear of your vehicle.

All “old style” number plate identifiers, or no identifier at all is now illegal.

Old style ones include a GB identifier with the Union flag, the Euro flag, any national flag for England, Wales, or Scotland.

Again, if your number plate has the new UK identifier with the Union Jack then you are not required to have a full size UK sticker on your vehicle for France but you are for Spain etc so our advice is to be safe just get one anyway.

If you have an old GB sticker, you need to cover or remove it. Be careful of the paintwork if removing a sticker.

Where Can I Buy a UK Car Sticker?

Well, the good news is Drive-France is the sister website to "Euro Motoring Ltd" and if you visit that website you can find all you need.

On the Euro Motoring site we supply not only the regulation UK stickers (adhesive ones), magnetic UK ones and the number plate stickers and a full range of other items you may need.

Do I Need a UK Sticker on my Car?

100% yes if you are going to be driving outside of the UK. As mentioned above you definitely need a full size one, either adhesive or magnetic, in Cyprus, Malta and Spain.

Though you have the choice for other European countries to just rely on having the UK Number plate stickers.

It is your choice but you must display at least one type of UK sticker.

If you need a UK sticker for your motorbike then you you have a couple of options to choose from.

Check them out here.